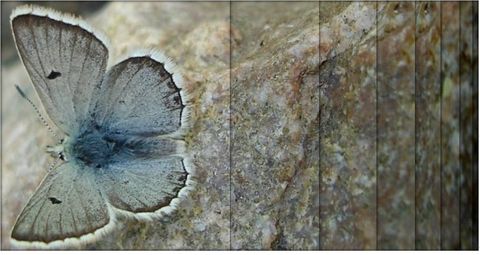 Since 2003 new methods have been employed for butterfly surveys and monitoring. The European Monitoring Grid (1996) was applied for the territory of the republic that was divided the area into 374 squares, 10x10 km each. Further, the squares were divided into two groups. The first group was consisting of squares, where the monitoring was conducted, and they belong to several categories, including squares placed in the existing protected areas and squares located in close vicinity of protected areas where agricultural or industrial activities were implemented (it allows comparison of the habitats inside protected areas with the ones which have been influenced by human). Third category of squares where monitoring was conducted were sites, which have been detected founded on floristic ranging of A.L. Takhtajan (1949), based on assumption that the diversity of plants is important in determining the diversity of butterfly species.
In the second group of squares monitoring was not conducted: due to lack of resources or physical impossibility.
Usually, the squares themselves were not uniform: in a single square one could find several natural habitats, so for full coverage of the square, we laid on one route for each habitat. Thus, the number of routes in one square was varied from one to three. The frequency of counts on each route was determined by duration of the spring and summer seasons, and depending on the height was ranged from one to four times a year. 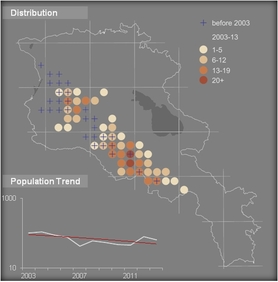 For the study of distribution and abundance of butterflies the data collected from 2003 to 2013 with the same methodology was used. Taking into account the fact that the number of butterflies was counted on routes of different lengths, for their unification a number per 1 km of route was computed according to the formula
N1km = 1000*(n/Lroute), where N1km is a number of butterflies per 1 km of the route, n is a number per route, and Lroute is a length of the route.
To visualize the species distribution we have computed waited mean of N1km for 2003-2013 (Nwmean), after that  using ArcGIS 10.1 we have created a linear shape file for each species, where by coordinates of the start and end points of the route the lines have been outlined; the lines have had a value of Nwmean in the attribute table for each route. With the next step we have created a point shape file, where the point was constructed in the 10x10 km square, and was uniting 1-3 routes.  Coordinates of the point have been taken as the central coordinates of the square and the average of values of Nwmean was calculated. Since abundance of a species can vary within a range a necessity of better demonstration of the uneven population pattern emerged. For the purpose the values of Nwmean have been conditionally grouped into the following categories: 1-5; 6-12; 13-19, and over 20. Those categories received different colors and that allows visualizing the nonuniform number of the species on the map.
Information on the species distribution was supplemented by historical records, which have not been uniformly collected though. Thus the material (including collections) until 1995 was tied to the geographic locations, while later registrations – since 1996 have had GPS coordinates. These registrations were not а subject to quantitative analysis, but were transferred to GIS format and reflected on the distribution maps. To compute and visualize the population trend we have used Collated Index taken in a logarithmic scale, which was calculated using N1km with use of the TRIM 3.0 software. For statistical analysis the log-linear poison regression was used: at first the mean Collated Index was calculated for the period of 2003-2013, and then, each year  was receiving an index, depending on level of difference from the mean Collated Index. The obtained graph was used to calculate the trend and percentage of decrease or increase of the population, significance was considered at p<0.05 level. 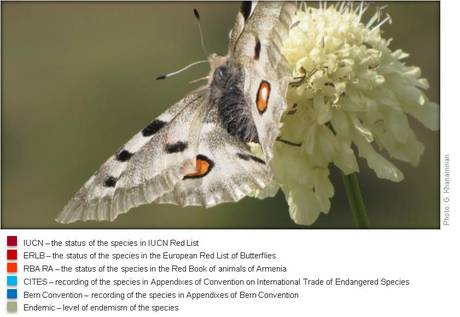 To assess the conservation status of species the last manual of IUCN (2012) Guidelines for Application of IUCN Red List Criteria at Regional and National Levels: Version 4.0 was taken as a basis, which was used together with more general guidance: IUCN Red List Categories and Criteria: Version 3.1. According to the Guidelines, to determine the status of the species we estimated population of the species and its habitat in the territory of Armenia, the population trend over 10 years, the risk of disappearance of habitat, the degree of specialization of the form, the degree of endemicity and its representation in national and international documents and regulations. Initial information needed to assess the conservation status is set out in species accounts, particularly in the section Distribution and biological peculiarities we present its distribution in the world, occupied habitat, flight period, the stage of hibernation and host plant in Armenia; section Population dynamics refers to the number of species, its dynamics and existing or potential threats (section is illustrated with map showing the change in the population throughout the range, and the graph that shows the change in the number for the period 2003-2013); section Conservation measures states the measures that are necessary for the protection of a species and its habitat or requires further study. Species accounts are complemented by the status of the species at the national, regional and international levels, as symbols at the right demonstrate. The conducted assessments of the status of threatened species in Armenia, but not yet included in the Red Book of Animals of Armenia  are planned for submission to the Ministry of Nature Protection of the Republic of Armenia, and assessments of the species that are at risk of global extinction, but have not been evaluated internationally are planned for submission to the IUCN Species Survival Commission.

The area assessment is based on monitoring data (collected in the period 2003-2013), supplemented by data for the period 1993-2002, the latter have been used to generate species lists for the areas. Further the target species have been separated (van Swaay & Warren 2006), and the species diversity characteristics, including number of endemics of the region have been identified. Based of these two components, the decision about fitting the territory with the criteria of PBA was made. Then each area was presented in the following sequence: description of the territory, which included the geographical coordinates of the central point, elevation range, area, main habitats (IUCN: Habitats Classification Scheme version 3.0), the dominating plant species and general information about the climate; description of the fauna of butterflies, which included information on the species diversity and lists of target species and endemics; description of the threats, which included types of the land use in these areas, existing and potential threats arising from human activities (IUCN: Unified Classification of Direct Threats version 3.2); national or international protection status, which was denoted with the following symbols (see picture).
The current information was presented to Butterfly Conservation Europe for approval and inclusion of the PBA into the general database. The information that was collected to assess the status of the territory as a PBA was also used for popularization and promotion of the site for butterfly-watching, becoming in fact the basis for designing of tourist trails. Based on that, the information materials were developed, such as trail-guides and information boards, which have been complementing the existing infrastructure of protected areas (Lake Arpi National Park). The next step is a training of rangers of protected areas in species identification and guiding of tourists on a given trail. Along with this, we conduct lectures and excursions with local students, during which the specificity of the local fauna was emphasized giving it a character of exclusivity, and motivating the younger generation to be responsible for the species and their habitats. Promotion of the territories is finalized with the actions aimed at disseminating information about the opportunities of butterfly watching (Track Arevik National Park) among local tour operators which have wildlife tour packages. In addition to these actions, efforts in developing the infrastructure (such as Information and Accommodation Centers) were started in 2016 with the pilot project "Development of Butterfly-watching in Gnishik community-managed protected area".